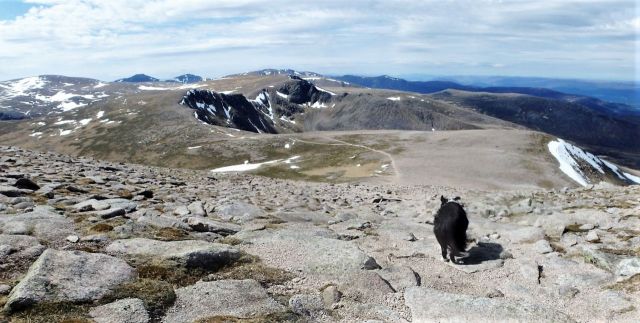 Most of my Cairngorm visits over the years have been to the ski slopes, though on one occasion I did do a trip away from the ski lifts to cross the summit of Cairngorm on Alpine Touring skis. That’s barely scratching the surface of the largest National Park in the UK, though I have made a couple of hiking trips there over the years. The first one was as a teenager in 1969 – a mate and I had big ideas about walking the ‘Big Four’ Cairngorm summits with a wild camp thrown in. For those not in the know, tents back then were a bit more, err … substantial!

The Route – Cairngorm and Ben Macdui

My Blacks Mountain Tent was brill, and would have survived an arctic storm, but it weighed more than 5 kilos (about 12 pounds) and that was just the tent! We ended Day 1 down in the Lairig Ghru, having done Cairngorm and Ben Macdui, with Cairn Toul and Braeriach to follow on Day 2, but we soon realised we had bitten off more than we could chew with our ‘English’ sense of mountain scale and our bloody huge rucksacks! Day 2 we headed back the short way!

May 2019 – It was time for a return visit to the wild Cairngorm Plateau but without the weight this time. The plan was simple – starting from the Ski Centre car park, up to the Ptarmigan Station, over Cairngorm summit followed by Stob Coire an t-Sneachda then a left turn before Cairn Lochan to head for Lochan Buidhe, then on to Ben Macdui. From there a bit of backtracking would take me back to the path on the west side of Cairn Lochan before heading back below Coire an Lochain and Coire an t-Sneachda.

Heading up the path to the Ptarmigan restaurant and lift station 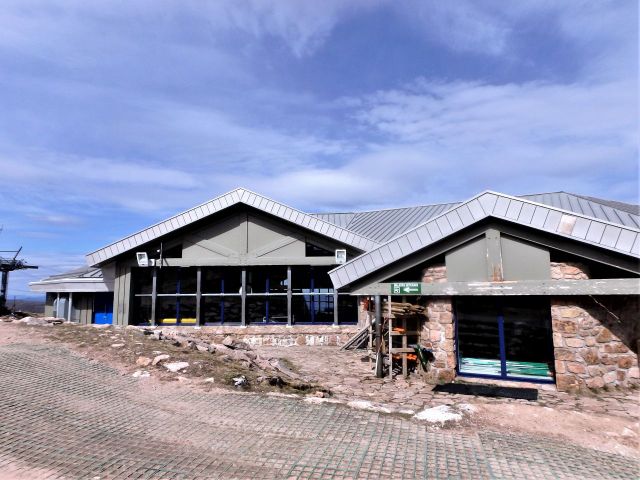 The first bit of the day was the least interesting. I’ve already confessed to being a skier, and the commercial ‘uplift’ makes it possible to cram many kilometres of skiing into one day, but the ski infrastructure is a bit of an eyesore. The Ptarmigan station and restaurant was deserted, a victim of the failed funicular railway that is due to be repaired over the next year, as it would cost more than the planned repairs to re-instate the hillside back to nature. Sadly, it’s all about money, as usual.

Snow fences near the Ptarmigan Centre 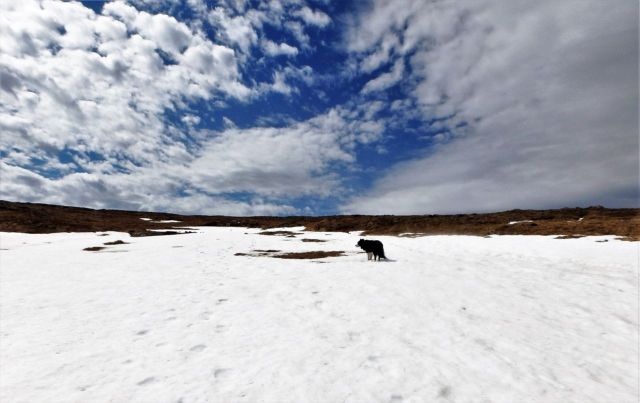 Snowfield on the way to the summit of Cairngorm

…. and the summit weather station

It doesn’t take long to leave the commercial scene behind, and once beyond the snow fences, I was heading into wilder country. People seeing these mountains in spring or summer would probably find it hard to believe that in winter these hills are not Alpine – they are Arctic. It was mid-May but the winter snowfields were still clinging on, although the summit was bare. The cairn was a welcome sight and it’s hard to dislike the weather station which, although it looks alien, has probably saved scores of lives by warning of dangerous weather on the way.

Looking southwest towards the cliffs of Stob Coire an t-Sneachda 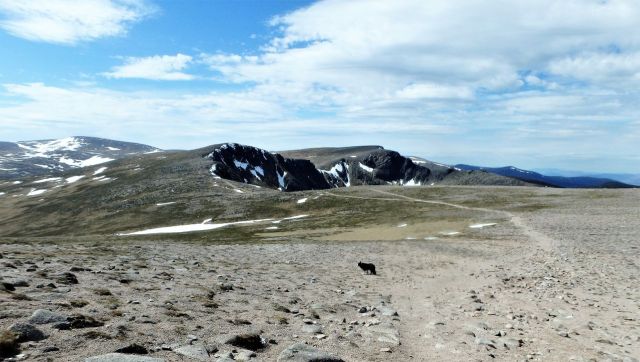 Leaving the summit plateau, heading towards Stob Coire an t-Sneachda

The cliffs of Stob Coire an t-Sneachda, seen from below the previous day

Leaving the summit, it didn’t take long to get to the rim of Coire an t-Sneachda, which translates as ‘Corrie of the Snows’. It’s a popular climbing venue, both in winter and summer, but the view looking down doesn’t do the place justice. Fortunately, I had anticipated that by taking a walk into the corrie with Chris the previous day – it’s rare in Scotland to access such magnificent surroundings without a major walk in, but Chris had enjoyed the trip

The bealach between Stob Coire an t-Sneachda and Cairn Lochan 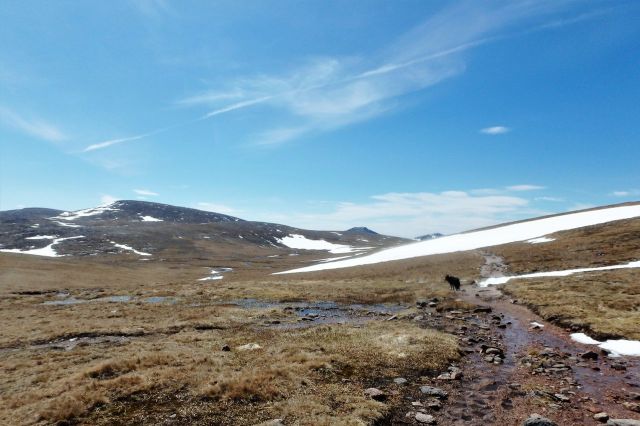 Heading towards Ben Macdui and the site of the 1971 tragedy

At the bealach (pass) below Stob Coire an t-Sneachda, I turned away from the Northern Corries of the Cairngorm Plateau to head directly for Ben Macdui. The route follows an easy path to the small lake of Lochan Buidhe (‘The Yellow Lake’), effectively cutting the corner and avoiding the ascent of Cairn Lochan, which my mate and I had toiled over with our heavy packs in 1969. Today’s route was also the route followed in what developed into the worst disaster in the history of UK mountaineering.

In November 1971, two groups of teenagers aged 15-16 with three instructors followed the same route that I followed as described above. Their plan was to attempt the same Big Four that I set off to cover in 1969, an overly ambitious plan considering the ages of the kids. The main difference between the two trips was that my mate and I went in August 1969 – in November 1971, winter arrived early in the Cairngorms.

The group had split into two parties, the stronger party of eight going with the one male instructor and the slower group of six following with two female instructors, but both groups were hit by severe blizzard conditions. The emergency plan was to head for a rudimentary refuge at Lochan Buidhe named the Curran Shelter. The weather was so bad that the faster group ‘bailed out’ and stayed at Curran overnight in very uncomfortable conditions. When the slower group didn’t arrive, it was assumed they had turned back.

The slower group had not turned back, and instead had pressed on towards the Curran Shelter. They ended up following the Feith Buidhe stream, but the snow became too deep to struggle through and the group was forced to bivouac in the open, just 300 metres from the Curran and safety. The next day, one instructor and one boy attempted to go for help but got no further than 25 metres from the bivi site. In the meantime, the stronger group set off back to Rothiemurchus where they arrived at 5pm to discover that the other group was still overdue.

A search was started that night, with the overdue party committed to a second night in a bivouac in near-Arctic conditions. The search continued into the next day, when one of the missing instructors was found trying to raise the alarm. At the bivouac site, the rescuers found that the other instructor and five of the six kids had died of exposure.

The disaster led to more rigid controls being placed on organised groups of youngsters taking part in adventurous activities. There then followed an acrimonious debate about the Curran and other emergency shelters. It was argued that the fact that shelter was there was an encouragement to press on in bad conditions – the counter-argument was that the shelters had saved lives in the past. In the end, it was decided to demolish Curran and two other shelters, and no trace of Curran can be seen today.

I remember the tragedy well – I was a student teacher in 1971, hoping to specialise in outdoor pursuits, and I remember thinking at the time that there would be big changes in outdoor education. For reasons that had nothing to do with this tale, I didn’t finish my teacher training course and instead took a completely different career path by joining the Royal Marines.

Looking west across the Lairig Ghru towards Braeriach and Cairn Toul

The slopes of Ben Macdui

Closer view of the Summit – not pretty and fairly busy!

Leaving those sad memories behind me, I pressed on with Border Collie ‘Mist’ towards Ben Macdui. It’s not a pretty mountain in itself but it makes a magnificent viewpoint overlooking much of the main Cairngorm Plateau. It was surprisingly busy at the summit, as everyone else seemed to have decided to have a lunch stop at the same time. ‘Mist’ took the opportunity to go scrounging for a morsel or two.

Heading back towards the descent route ….

…. with Lochan Buidhe in view and Carn Lochan above

The path to the west of Carn Lochan, with the Lairig Ghru below on the left

Sron na Lairige on the other side of the Lairig Ghru

I had to retrace my steps back towards Lochan Buidhe, but once again I turned away from Cairn Lochan, this time avoiding it by taking a path on the west side of the mountain. I’ve no idea where the groups who had been on Ben Macdui disappeared to, but my return route was deserted with just two other hikers taking that option. It wasn’t quite deserted though.

‘Mist’ sees something in the distance

The first view into Coire an Lochhain below Carn Lochan ….

….with a view of the tiny lakes that give the names to the corrie and the summit

Heading towards the rim of Corrie an Lochain, with its tiny lakes that give the names to the corrie and the summit, ‘Mist’ suddenly went on alert at something ahead. Her eyesight is far better than mine, but I think it was a scent that had caught her interest. It was the reindeer herd that has been part of the Cairngorm magic since 1952. If ‘Mist’ was interested in the reindeer, they had no interest in the dog or me. We left them grazing peacefully – it was time to head for home. 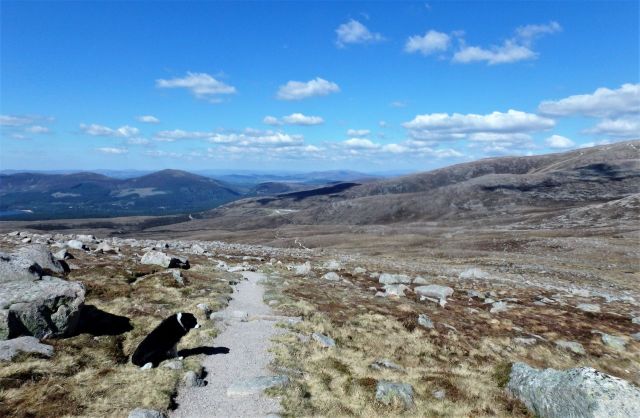 Text and images © Paul Shorrock except where indicated

p.s. – Although I normally use the local language for mountain names, especially in my adopted home of Wales, I’ve used the anglicised versions of Ben Macdui (Beinn Macduibh), Braeriach (Braigh Riabhach) and Cairn Toul (Carn an t-Sabhail) as the original Scots Gaelic versions would be unrecognisable to most outdoor folk, even those who are Scots.

I've been mucking about in the mountains for longer than I care to mention. I started out by walking my local hills, then went on to rock climbing, mountaineering and skiing. Still doing it, and still getting a buzz. I'm now sharing the fun, through my guided walking business (Hillcraft Guided Walking) and by writing routes for other publishers, mainly Walking World and Discovery Walking Guides. Just to make sure I keep really busy, I am also currently a member of my local mountain rescue team.
View all posts by Paul Shorrock →
This entry was posted in 1. Scotland, Bothy days and tagged Border Collie, bothy, hiking, hillwalking, mountain rescue, mountaineering, photography, Scottish Highlands. Bookmark the permalink.