#252 – Glamaig and the Northern Hills of the Red Cuillins

The Northern Hills of the Red Cuillin

Several months had passed and the Blog was starting to gather dust.  Writing a blog every two weeks isn’t so difficult a task if you keep it up, but after a few weeks of not writing it’s easy to get out of the habit.    All that was needed to kick start things was an inspiring day in the mountains with some good company – time for Glamaig in the Red Cuillins of Skye to make an appearance. 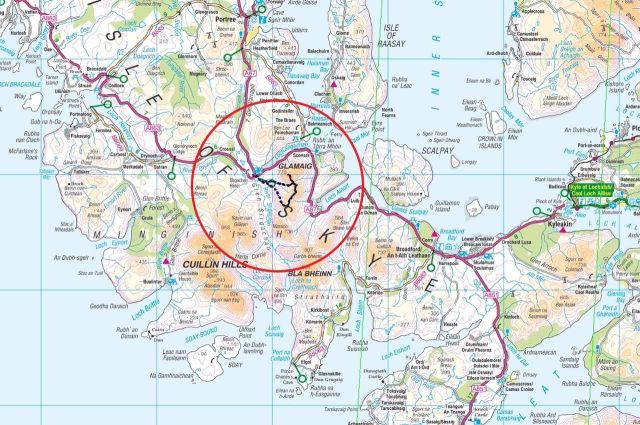 The Red and Black Cuillins of Skye

I’ve lost count of the number of times I’ve been to Skye over the years, but it usually involves the Black Cuillins in some way or another (see posts #224, #225 and #247 for starters).   No wonder really – the Black Cuillins are amongst the most dramatic hills in the UK, and a paradise for climbers and mountaineers.  For years I had avoided the rounded red hills, just across the glen from the pointy black ones, so it was time to even things up.

The route, including the nearby northern end of the Black Cuillins

The most obvious (and brutal) route up Glamaig is straight up the front from Sligachan.  As we were camping at The Slig, this was quite feasible for those who have the speed of a race horse, the strength of a cart horse,  and the brains of a hobby horse!    Yet amazingly, this is the way the runners do it every year.   Described as ”….an appalling and seemingly endless scree slope”, the fastest of the athletes go up and down in around 45 minutes.

The race is said to commemorate the first running ascent of the mountain in 1899 by a Sherpa, Harkabir Thapa, who ran from the Sligachan Hotel to the top of the mountain before running back to the hotel bar.    His time of 75 minutes is a bit slower than the elite athletes of today, but he might have been a bit faster had he not been running in bare feet! 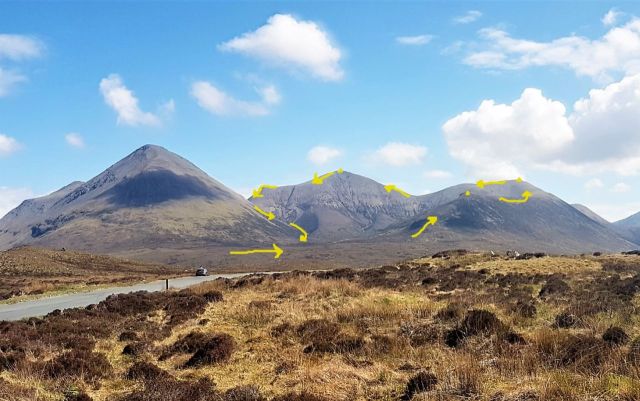 Bare feet or otherwise, there was no way I was going to follow the ‘full frontal’ approach.  The map showed a much more civilised and sensible route following the low ridge of Druim na Ruaige to Beinn Dearg Mheadhonach (Middle Red Mountain), then on to Beinn Dearg Mhor (Big Red Mountain) before dropping down to Bealach na Sgairde (Pass of the Scree).    From there, the map showed a steep ascent to the final summit of Glamaig.

The cast including the author, ‘selfie expert’ Richie and Collies ‘AJ’ ‘Caizer’ and ‘Mist'(RB)

Most of my mountain days are solo, apart from the company of Border Collie ‘Mist’, who is the ideal mountain dog, never complaining and always willing – especially if there’s a chance of a sandwich!    Today we had company for a change with Richie, a mate from NEWSAR (the mountain rescue team back home) and his two collies ‘Caizer’ and ‘AJ’.  The weather was set to be fair with blue skies and a cooling breeze, and as this was in May, there wasn’t a midge in sight.  Perfect!

Richie on Druim na Ruaige, looking back towards Sligachan

On Druim na Ruaige with Marsco in the background (RB)

‘Mist’, ‘Caizer’ and ‘AJ’ with Sgurr nan Gillean and the Black Cuillins behind (RB)

Looking across to Glamaig from Druim na Ruaige

The crossing to the ridge of Druim na Ruaige was reasonably dry, and the views towards Glen Sligachan with Marsco on one side and Sgurr nan Gillean and the Black Cuillins on the other did not disappoint.    Marsco is still on the ‘to do’ list when I finally get round to it, but old friend Sgurr nan Gillean looked quite different to the view from the Sligachan Hotel.   Looking in the other direction, one thing was becoming obvious – the ascent of the final peak of Glamaig was going to include a big height loss from Beinn Dearg Mhor before a killer ascent.

On Druim na Ruaige, heading up to the first peak of Beinn Dearg Mheadhonach

‘Mist’ apparently not quite so enthusiastic to pose ….

….so much so that she’s sticking her tongue out at me!

Eventually, ‘Mist’ decides to pose (Glamaig in the background)

The final rising section of Druim na Ruaige heading up to Beinn Dearg Mheadhonach was pleasant enough, with time and opportunity for a bit of canine photography (that’s photos of the dogs, obviously  – they aren’t very good at remembering things such as shutter speeds and f-stops, and their paws are a bit clumsy on the focusing).   Caizer is the ideal ‘doggy model’, and his main aim in life seems to be to please Richie and Babs by posing on pointy rocks.   ‘Mist’, on the other hand, doesn’t share Caizer’s enthusiasm, and I could swear she was sticking her tongue out at me before finally giving me the classic Border Collie pose.

The final scree slope to the summit of Beinn Dearg Mheadhonach

The author and ‘Mist’ on Beinn Dearg Mheadhonach, looking down towards Loch Ainort (RB)

Richie and ‘The Boys’ admiring the view

The last bit of uphill on to the first summit of Beinn Dearg Mheadhonach was a scree slope, a feature we were soon to recognise and loath in equal measure.    The view down to Loch Ainort and the island of Scalpay was the reward and we celebrated with a sarnie or two.   I’ve been coming up here for over forty years now, and it was fascinating looking down on to the A87 road that I’ve driven more times than I can remember.

The Bealach na Sgairde with Glamaig behind

From Beinn Dearg Mheadhonach, the route to Beinn Dearg Mhor was unremarkable apart from some height gain and some more scree, but the views back to our outward route were compensation enough.   The descent from Beinn Dearg Mhor was something else though – more knee-wrecking scree and the prospect of a 400 metre slog up Glamaig from the well-named Bealach na Sgairde (Pass of the Scree) just to have another knee-wrecking descent to get back to the bealach.    Richie and I are both ex-military (he the Royal Welch Fusiliers and me the Royal Marines) and we share that decisiveness that comes from military service – we also share wrecked knees.  Faced with the decision of a painful ascent/descent of Glamaig or an early descent to the pub, we chose the only real option.

A chance to cool down for The Boys (RB)

….where there just happens to be a pub where dogs are allowed in (but don’t tell Mum!) (RB)

On the way back to the bar at Sligachan (yep, that’s the option we came up with), the dogs had a chance to cool down in the crystal-clear pools or the Allt Daraich.  From there, a short wander over the boggy moor took us back to a cold cider at the Slig.  We were blessed with a great sunset later on, with a bit of a red glow on the Black Cuillins – on the other side of Glen Sligachan, the Red Cuillins were looking very, very red.

Sunset over the Black Cuillins….

p.s.   apologies to regular readers (if there are any left!) for me being ‘off grid’ for several months – things to do, etc.    Back to posting now, watch out for a new episode every two weeks on a Monday morning.   (Thanks Steve Davis, for giving me the extra push to get writing again!)

I've been mucking about in the mountains for longer than I care to mention. I started out by walking my local hills, then went on to rock climbing, mountaineering and skiing. Still doing it, and still getting a buzz. I'm now sharing the fun, through my guided walking business (Hillcraft Guided Walking) and by writing routes for other publishers, mainly Walking World and Discovery Walking Guides. Just to make sure I keep really busy, I am also currently a member of my local mountain rescue team.
View all posts by Paul Shorrock →
This entry was posted in 1. Scotland, Uncategorized and tagged Border Collie, hiking, hillwalking, mountaineering, mountains, photography, Scottish Highlands. Bookmark the permalink.