Arenig Fawr on the right, with the ridge of Craig y Hyrddod on the left

I’ve spent most of my mountaineering life not knowing a thing about the Arenig hills of North Wales.  That’s probably not unusual for those who only visit the Welsh hills a couple of times a year, and are then seduced by bigger, better known and more accessible hills.  Then the Discovery Walking Guides project came along and nudged me towards these less familiar hills – we now live about forty miles from them. 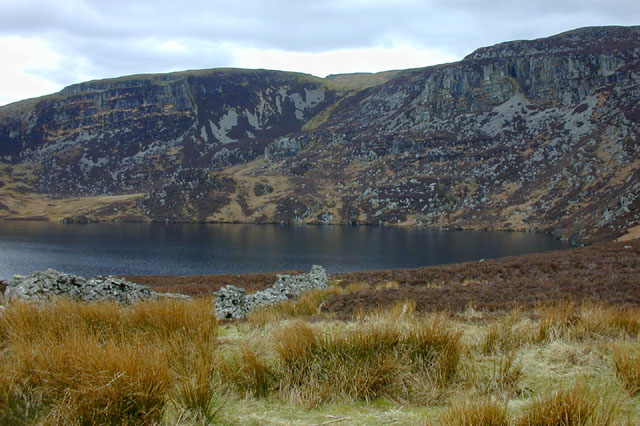 The lake of Llyn Arenig Fawr, one of the popular approach routes © Nigel Brown

I’ve covered more new ground in Wales over the last couple of years whilst researching the Discovery guide than I have in the previous couple of decades.  I’d had my eyes on the Arenigs for a while, but other hills had claimed priority – there have been plenty of alternatives to distract, with great hill days like Rhinog Fawr (post #95) and Rhinog Fach (post #96) competing for attention, but it was time at last for an Arenig day.

The start – a muddy track!

On the Northwest Ridge, with the Moelwyn hills in the distance on the right horizon

The most popular route up Arenig Fawr (“Big High Ground”) seems to be on the east side, via the lake of Llyn Arenig Fawr, but I fancied the Northwest Ridge via Craig Y Hyrddod (“Crag of the Rams”).  Chris and ‘Mist’ seemed happy enough to go along with that choice, though the start along a muddy track was an inauspicious beginning.  Then things literally started looking up as we turned off the track to climb the ridge.

Chris admiring the view from the Northwest Ridge

The ridge turned out to be a great choice.  It was steep in places, but never excessively so, and we gained height rapidly with just the occasional stop.  What’s more, the panorama behind us looking to the northwest was so stunning that we would have kept stopping anyway, if only to check out the views.  It wasn’t long before the angle eased, with a height gain of only 100 metres over the last 1 km of ascent.

Walkers at the summit of Arenig Fawr (854 metres) 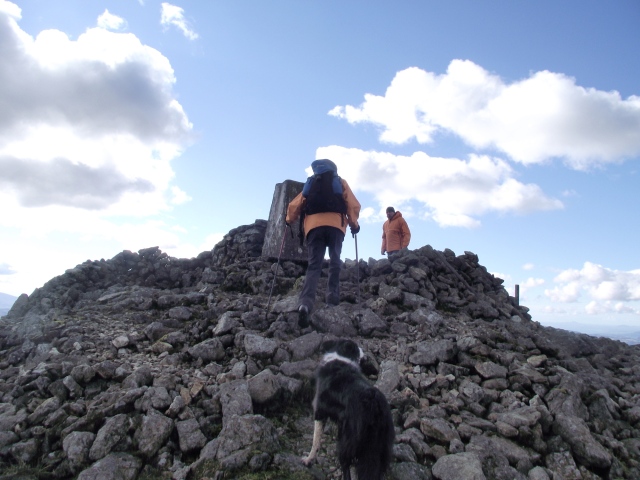 The fine weather ensured that we were not alone today, with a group vacating the summit shelter as we arrived.  A cool breeze didn’t encourage long-term loitering, but I took time to look at the memorial to a flying accident in August 1943, when a B17 Flying Fortress crashed at one o’clock in the morning whilst on a navigation exercise.  The eight crew members from Illinois, Kentucky, Ohio, California, New York, Michigan, Idaho and Pennsylvania were all killed.

One advantage that the Arenig hills have over other hill groups is that they are a superb viewpoint, with most of the ranges of Snowdonia visible from the summit on a clear day.  I joined the one remaining occupant of the summit shelter in the game of “name the summit” (I think it’s a bloke ‘thing’!) until Chris pointed out that she was starting to get cold – ‘Mist’ was also getting restless, so being outvoted I set a course for a descent down the Southeast Ridge. 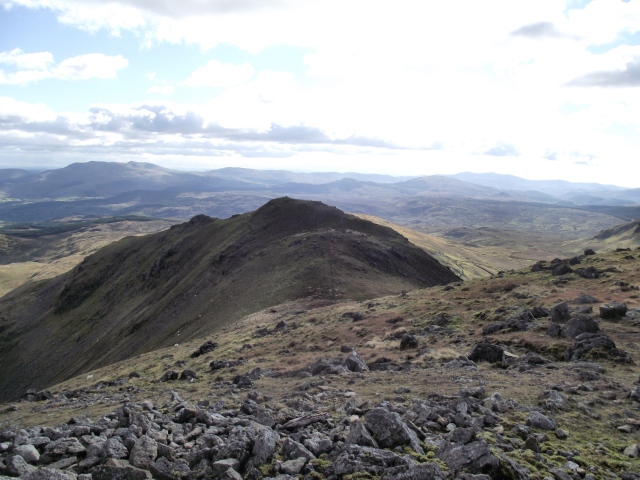 The Southeast Ridge of Arenig Fawr

On the Southeast Ridge, looking back to Arenig Fawr

Losing more height on the descent

The original plan had been to head for the col on the way to Moel Llyfnant, but the map had suggested that the way could be wet, a prophecy that looked likely to be fulfilled looking at the ground on the descent.  Instead, a tactical manoeuvre took us down an open hillside to a green track traversing the hillside above the boggy-looking valley bottom.

The descent to the green track, with Arenig Fawr still looming above

Down on to the green track we had seen from above ….

…. which gave us a (mostly) dry walk out

The green track did the business, and though wet in places it looked as though we had a better option than lower down the valley.  Earlier in the day I had looked across to Arenig Fach (“Little High Ground”) and the promise of continuing fine weather was already hatching a plan to come back the next day …. 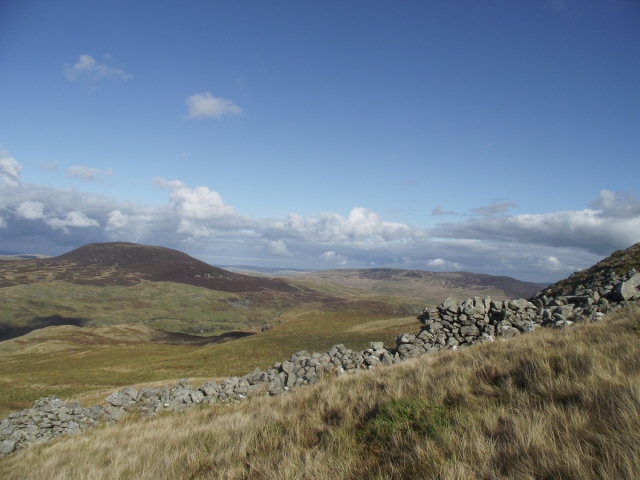 Text and images © Paul Shorrock except where indicated otherwise.  The images by Nigel Brown and Roger Davies are taken from the Geograph project, and reproduced under a Creative Commons Licence.  You will find more fine images by Nigel here and by Roger  here.

p.s. I did get back the next day and walked  Arenig Fach – it was to prove to be a very different day ….   Read about it here next week.