#133 – Rising to the challenge – The Yorkshire Three Peaks Challenge walk

As challenge walks go, the circuit of the Yorkshire Three Peaks is challenging!  As the name suggests there are three peaks on the route – Pen y Ghent (691 metres), Whernside (728 metres) and Ingleborough 723 metres).  Not big hills at a first glance, but they add up to a route of about 40 kms (24½ miles) with about 1500 metres (5000ft) of height gain, the equivalent of a serious day out in the Scottish Highlands.  On top of all that, most people set themselves the additional challenge of completing the walk in 12 hours.

Just before the start (GD)

For me, the Y3P Challenge is like an old friend (see post #15) – I’ve walked it, run it and even written a guidebook about it.  However since moving to North Wales last year, my sights have been on Welsh hills and mountains; I even joined North East Wales Search And Rescue (NEWSAR), and the hills of Yorkshire were forgotten.  Until, that is, the secretary of the rescue team asked for volunteers to help with a group he was leading on the Y3P  Challenge walk. 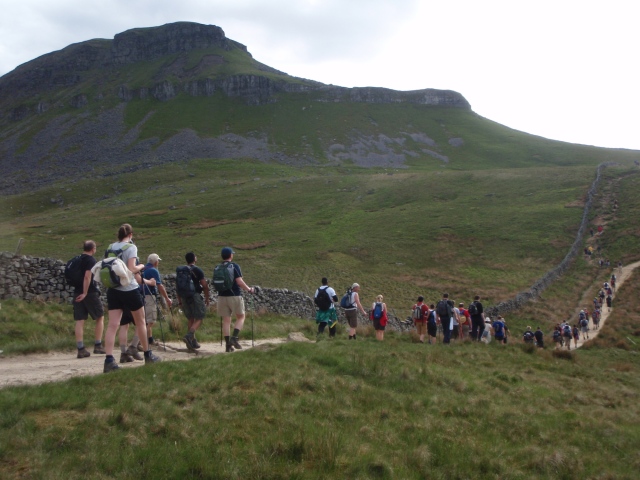 …. with Border Collie ‘Mist’ along, to make sure the humans didn’t stray 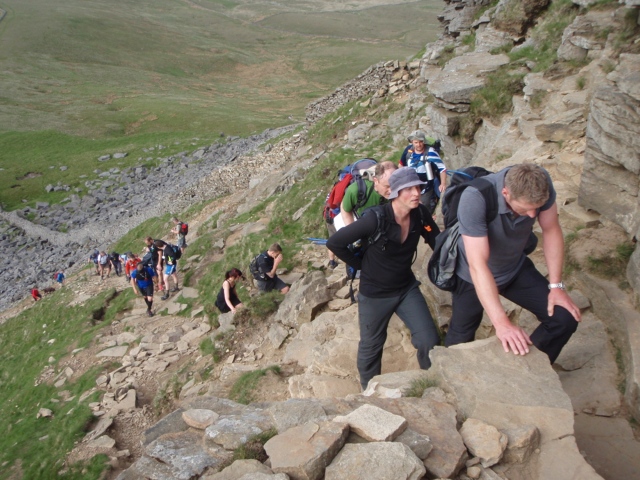 The rock escarpment below the summit of Pen y Ghent

A busy day at the top, with ‘Mist’ still keeping an eye on things

The group gathered together on the summit (GD)

So, a pleasant summer morning saw about 30 walkers ready to set off on the Y3P Challenge, with Gerald leading and NEWSAR members Dave, Peter and myself along to assist, and Border Collie ‘Mist’ along to make up the numbers.  Starting at 8.00 in the morning from Horton in Ribblesdale, we set our sights on the first peak, Pen y Ghent.  This is my favourite on the Challenge Walk, with the route winding through a couple of rock escarpments before reaching the summit.  During the week this is usually fairly quiet, but on a ‘Challenge Walk’ weekend you won’t find solitude!

On the descent, and heading for Whernside, the next on the list

Heading down on the long descent ….

From the summit, the next peak on the list (Whernside) lies far in the distance.   For people who don’t walk the hills on a regular basis, the elation of a quick and easy first summit is slowly eroded by a long hike to Ribblehead.  The famous Ribblehead Viaduct makes a welcome sight, as most groups take a break here – looming above the viaduct is Whernside.

After a break at Ribblehead, it was off again, passing the Ribblehead Viaduct on the way

The view behind, with the final peak of Ingleborough on the skyline ….

…. but with the next peak of Whernside to come first

A steady ascent on a good track …. 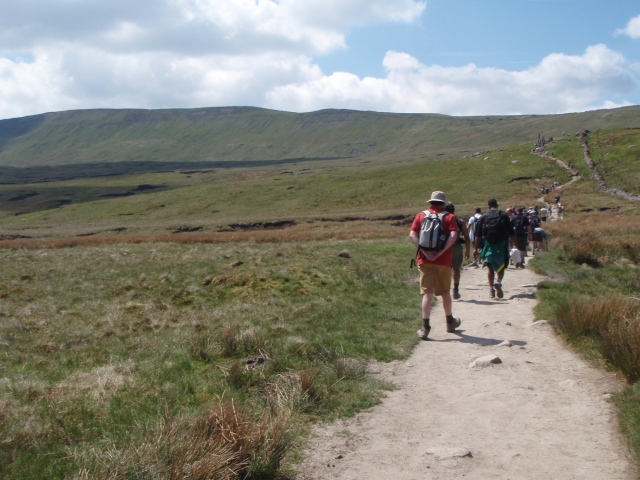 On Whernside summit at last, but with the last peak still to do (GD)

There are two popular ways up Whernside on the Challenge Route – one is short but brutal, following the runners route straight to the summit.  Gerald had opted for the kinder (and more ecologically friendly) way, taking a loop to the north.  Although the gradient is easier that way, most of the group were thankful to reach the summit for another short break.

On the descent from Whernside, with Ingleborough waiting in the distance

Not long after setting off on the descent, we had a small drama – a member of another group was in trouble, suffering from exhaustion and heat stroke.  Our group carried on with the more experienced members leading, as the NEWSAR members gave assistance to the casualty.  A helicopter was requested to assist with evacuation and the local rescue team also turned out, so with Gerald, Dave and Peter all busy at the scene, I set off to catch up with our group.

After another short break, it was off to Ingleborough ….

…. with the inevitable uphill sections ….

The top of the steep section ….

…. leading to the summit

I caught up with the back markers of the group at the last checkpoint near the Hill Inn.  The fitter ones including some experienced Y3P members had already set off, so having checked that everyone was still OK for the last peak, we started out for Ingleborough.  There’s no doubt that for some this was quite a challenge, and the chance to bail out at the checkpoint must have been very tempting.  It was a tired, but elated group that finally made the summit.

A final opportunity for a group photo … (GD)

Having reached the top of Ingleborough, it was downhill all the way to Horton – it’s a surprisingly long distance, especially for people who have been on the go for a 12-hour hill day, but the ‘finish line’ eventually came into view.  The entire group completed the challenge, and in so doing will raise several thousand pounds for charity – a good conclusion to a fantastic day out walking the Yorkshire Three Peaks Challenge.

…. Before the long final descent to Horton in Ribblesdale

p.s.  Members of NEWSAR are all volunteers, as are all members of UK mountain rescue teams – to can find out more about the team, click here

I've been mucking about in the mountains for longer than I care to mention. I started out by walking my local hills, then went on to rock climbing, mountaineering and skiing. Still doing it, and still getting a buzz. I'm now sharing the fun, through my guided walking business (Hillcraft Guided Walking) and by writing routes for other publishers, mainly Walking World and Discovery Walking Guides. Just to make sure I keep really busy, I am also currently a member of my local mountain rescue team.
View all posts by Paul Shorrock →
This entry was posted in 3. Yorkshire Dales and tagged hillwalking, Ingleborough, mountain rescue, Pen y Ghent, photography, Three Peaks Challenge, Whernside, Yorkshire. Bookmark the permalink.