The Spine Race – 268 miles on the Pennine Hills – In winter!

Every January for the past five years, a hardy bunch of ultra-athletes have set off from Edale in the Derbyshire Peak District with the intention of racing the 268 miles of the Pennine Way in seven days, in the worst weather that a British winter can throw at them. With the UK sitting in the path of Atlantic gales, ready to dump rain, snow and hail on the Pennines, the conditions up there are best left to the imagination.

The mass start at Edale on Saturday 9th January

Many blogs posts fly around the internet for months afterwards, some with the stories of the winners, the losers or just the humble survivors.   Other blogs go into amazing detail on the equipment used, and how to shave off a few more grams weight by drilling a hole in your spoon. This blog post is the story of one little outpost in one long, long race. 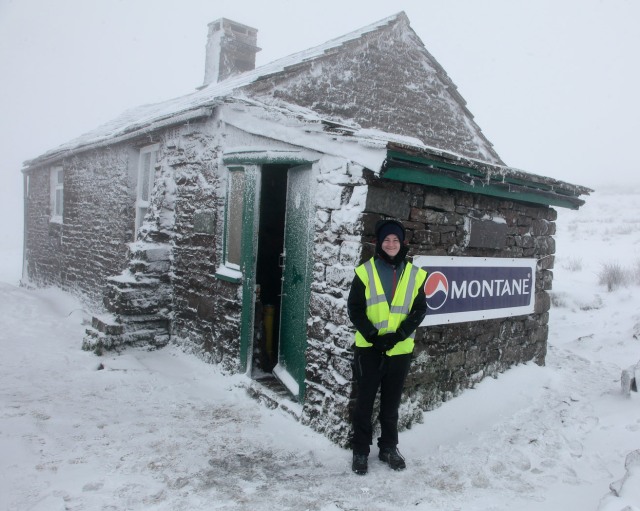 The highest bothy (and noodle bar) in the UK

Gregs Hut is the highest bothy in the UK, situated on the 700 metre contour below Cross Fell in Cumbria.   The stone building can be cold and cheerless, but during the Spine Race it becomes a haven of warmth and safety for the racers, and a supply of coal, wood and noodles makes Gregs Hut the highest noodle bar in the UK for a few, brief days. 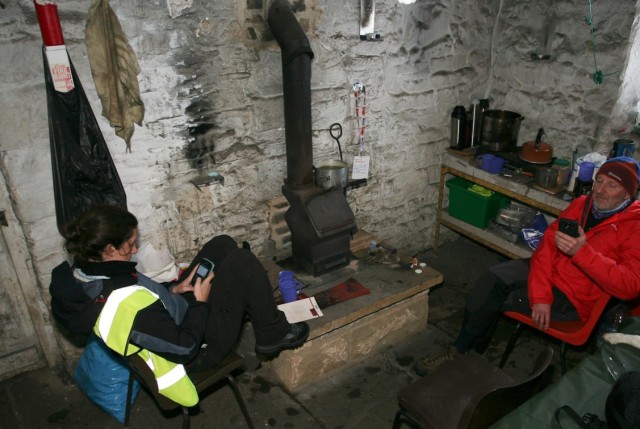 The occupants settle in

Watching the racers on ‘Open-Tracking’ with occasional 4G signal

The regular staff are me and my old mate John Bamber, along with Border Collie ‘Mist’, plus one of the young doctors from the medical team.   This year it was Pip – we still don’t know what she did wrong to deserve her exile to Gregs, but within no time she was settled into the routine, ready to do her bit.  New this year was a 4G phone signal that enabled us to watch the progress of the racers on ‘Open-Tracking’ – that is, if you held your mobile up to the window! 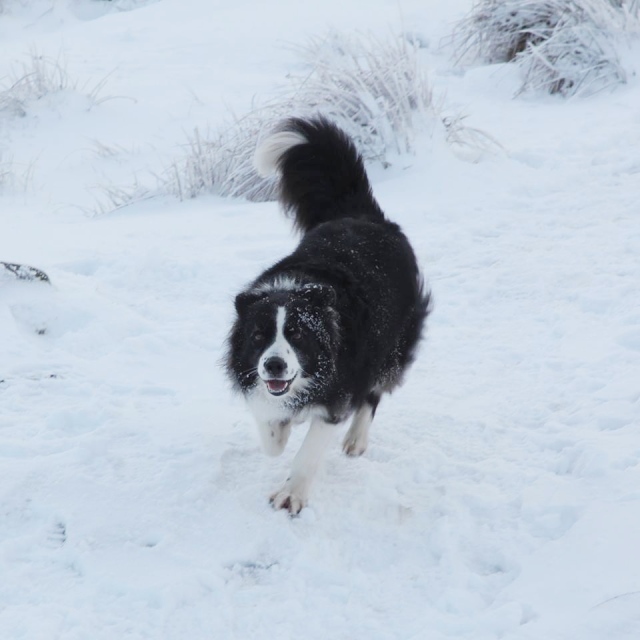 …. and an offer from ‘Mist’ to help finish off the food 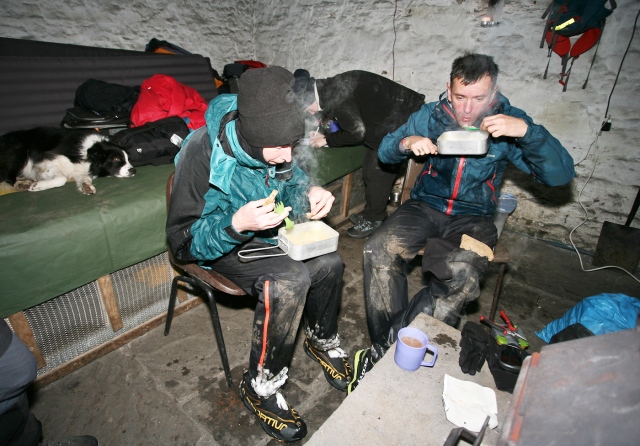 “Hmm, those two aren’t going to leave much!”

The return of peace and quiet

Once established, the team at Gregs set up a field kitchen that would gladden the hearts of many an ex-military man, with coffee and noodles on the go whenever a racer drops in. ‘Mist’ also helps out, remaining on constant alert ready to pick up any crumbs that are dropped – not much chance of that though with cold, hungry racers. 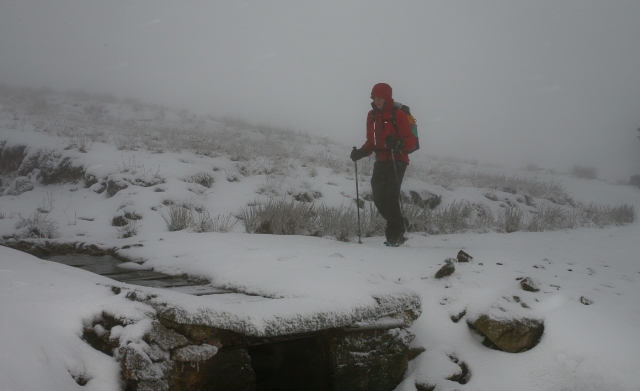 Sometimes the weather is wintery ….

…. but there’s always helpful advice from the resident staff *

Conditions this year were best described as wintery – sometimes it was just wintery, sometimes it was dark and wintery.   It must be really difficult at times for the racers to leave the warmth and smell of noodles behind, but with a bit of encouragement they are soon back in the race. (* This quote is legendary among Spine Racers, said by Checkpoint manager Nici Griffin in 2015 when asked what the weather was like outside)

…. possibly a great loss to the world of medicine

The main role in the past for the resident doctor at Gregs Hut has been patching up shredded feet destroyed by cold and wet, but this year Pip had no customers – Spine racers have learned the lessons of previous years, and Pip’s surgical skills found a new outlet instead in creative candle making.

Time for the march out for the residents

When the time came to leave after three days of occupation, it had been a trouble-free trip, with John and I scrambled only once in the early hours of Wednesday morning to check on the progress of one of the racers coming over Cross Fell – he was probably surprised to see two head torches bobbing up towards him, along with a Border Collie running round in the snow, but he didn’t let his surprise break his step and John and I had to ‘leg it’ to keep up with him!

Help came up from Garrigill – Alan Cormack and Landrover Defender

When the snow became too much …. 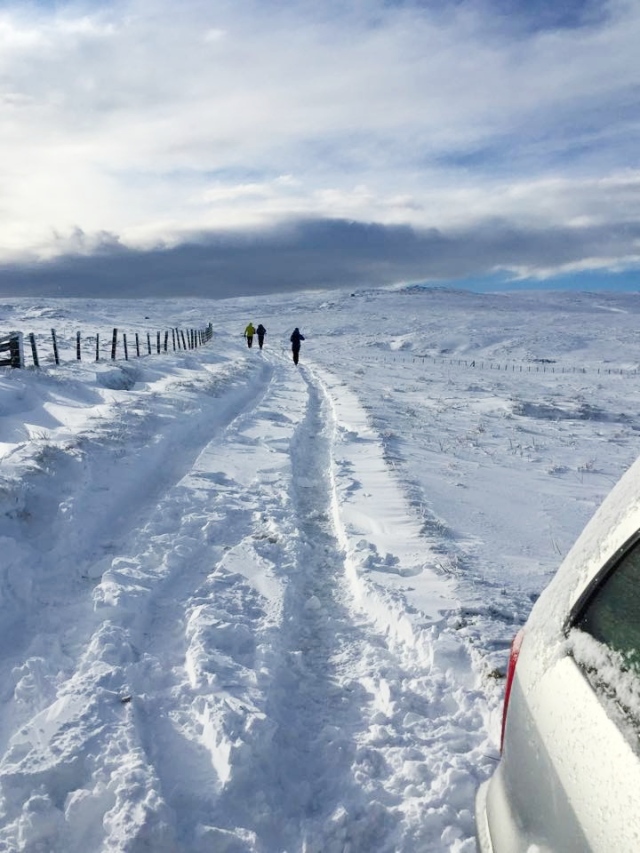 …. the team had to get out and walk

When the time came to leave we were presented with a dilemma – a load of equipment including everything except the kitchen sink, had been driven up to the hut by Landrover, but the track was now blocked by fresh snow.   There was only one answer – it would all have to be carried out.

Eventually the trusty Landrover could go no further

Members of the extraction team with Gregs Hut residents

The march out was a text-book example of cooperation and team work. A group of porters was scrambled in two 4X4 vehicles, leaving just two carries of 3 kms each way for the residents augmented by Mike and Peter from one of the safety teams.   A breeze dropped the air temperature of -3° Celsius to about -10° with wind chill, but the views of the Pennines under a snowy white blanket were amazing – what’s more, we get to do it all again in a year’s time! 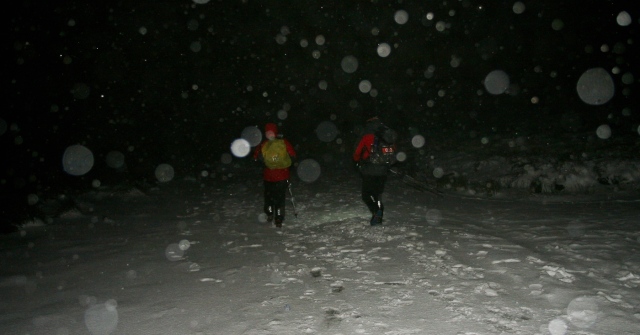 p.s. On Saturday 16th January the Spine Race officially finished, but for one man it was only the halfway point – the amazing Javed Bhatti reached Kirk Yetholm then after a few hours rest he began the return walk to Edale to complete the first double crossing of the Pennine Way in winter.    Come back in two weeks to read about it.

I've been mucking about in the mountains for longer than I care to mention. I started out by walking my local hills, then went on to rock climbing, mountaineering and skiing. Still doing it, and still getting a buzz. I'm now sharing the fun, through my guided walking business (Hillcraft Guided Walking) and by writing routes for other publishers, mainly Walking World and Discovery Walking Guides. Just to make sure I keep really busy, I am also currently a member of my local mountain rescue team.
View all posts by Paul Shorrock →
This entry was posted in 4. Northern England, Bothy days, Uncategorized and tagged Border Collie, mountain rescue, mountains, Pennine Way, photography, snow, Spine race, winter. Bookmark the permalink.