As Chris and I finished our bimble around Llyn Anafon and Drum (see post #219) we were followed most of the way back by big glowering clouds, and it started to pour down just as we arrived back at the car.   Looking back towards the Carneddau on the drive home, it seemed that Mr Snow had paid a visit to the hills – a return trip three days later seemed like a good idea, but things don’t always go as planned …. 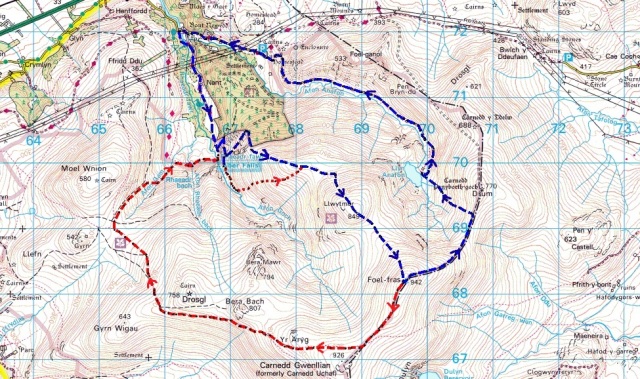 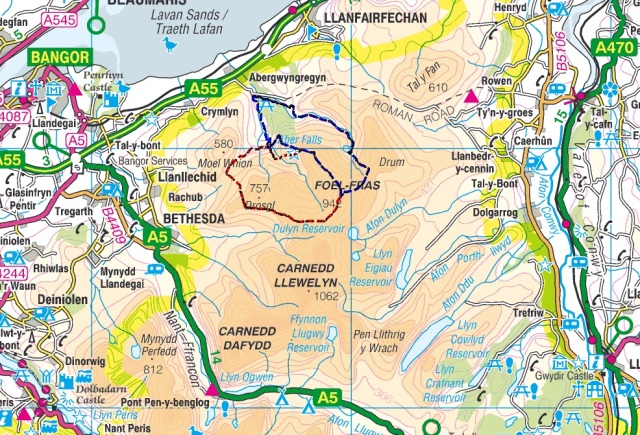 The mountains of the Carneddau

The initial plan was simple – I would head up to Aber Falls, take the path to the left of the falls as seen from below, then head up Llwytmor and continue to Foel Fras.   From there I would head south-west to Carnedd Gwenllian then take the path south of Bera Bach and Drosgl before heading back down towards Aber.   A cheeky little 17 kms distance with 1010 metres of height gain was almost Scottish in proportion – six hours was a reasonable estimate.    But, things don’t always go as planned …. 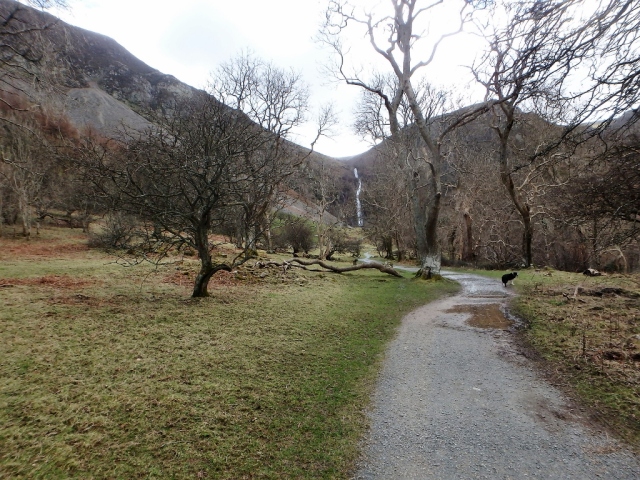 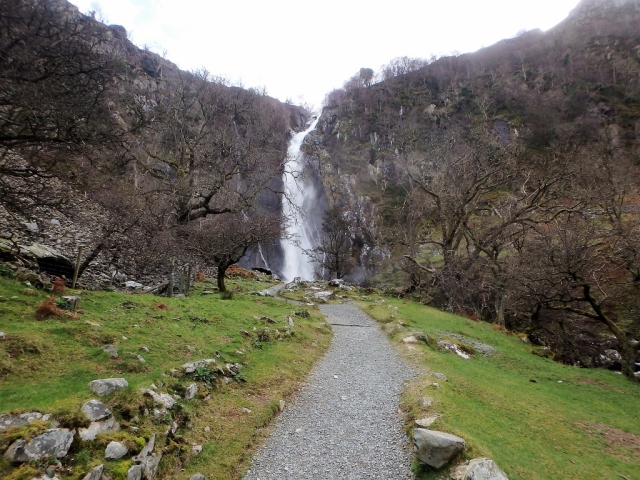 …. with much more water than usual!

As we finished our walk three days earlier, it looked as though I could expect a fair amount of snow on high ground on this trip, but the amount of green showing as I set off suggested otherwise.   One thing that soon became apparent, however, was the amount of water in the Afon Rhaeadr Fawr, and as the falls came into view I saw there was much more water than usual.    River crossings were probably off the day’s menu then. 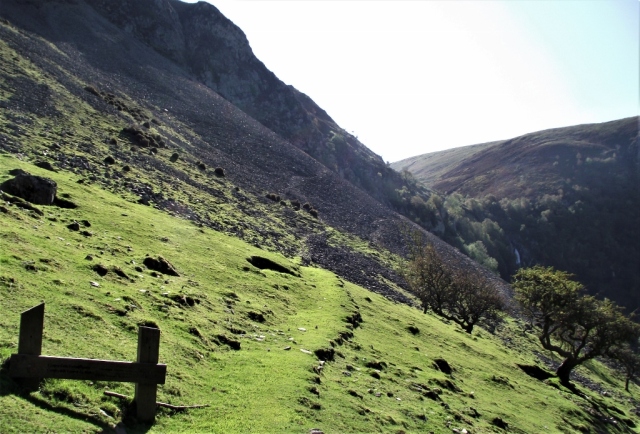 The path to the top of Aber Falls 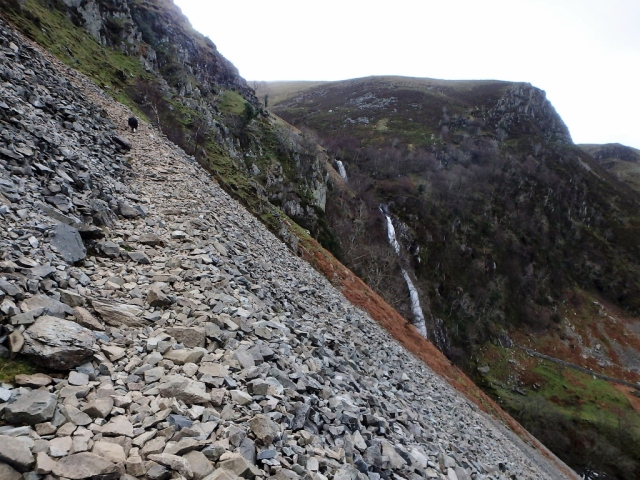 View of the falls from the path across the scree

I set off on the rising path towards the top of the falls, trailing behind Border Collie ‘Mist’ as usual.   The path crosses a scree slope, before following an entertaining route along rock ledges, followed beyond there by a small rock step.   This requires a bit of care when it wet as it can get greasy, and the ground below drops off towards the waterfall.   Once across the step, the planned route was a long, height-gaining slog up Llwytmor, but things don’t always go as planned …. 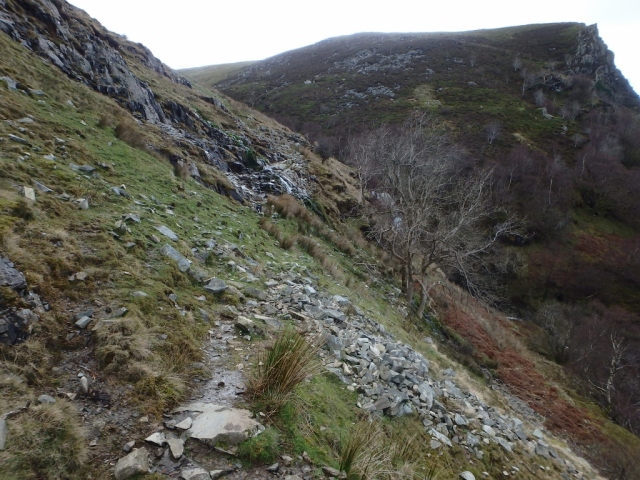 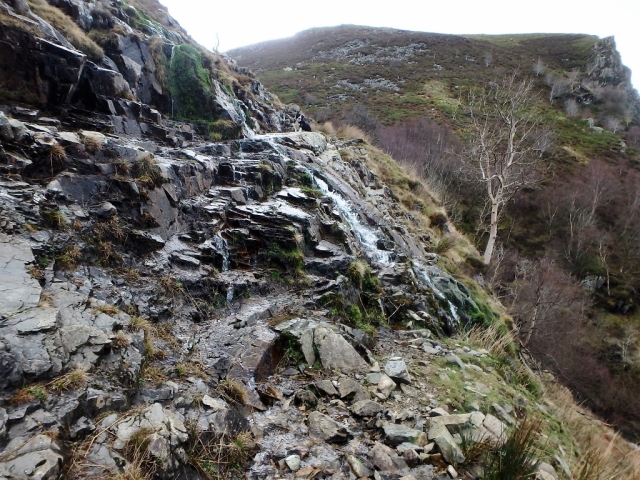 …. or in this case the greasy, slimy, wet rock step! (Note the drop-off below)

The rock step usually has a damp patch except in a drought, but today it was a small stream!   Wet rock in itself isn’t a problem – the problem here was that three or four metres of ascending rock slab were covered in slime which had the consistency (and friction level) of liquid soap.   I tried the usual crossing point but was forced to retreat.   Other options were tried, including traversing on the grass below the step.  Things were definitely not going as planned. 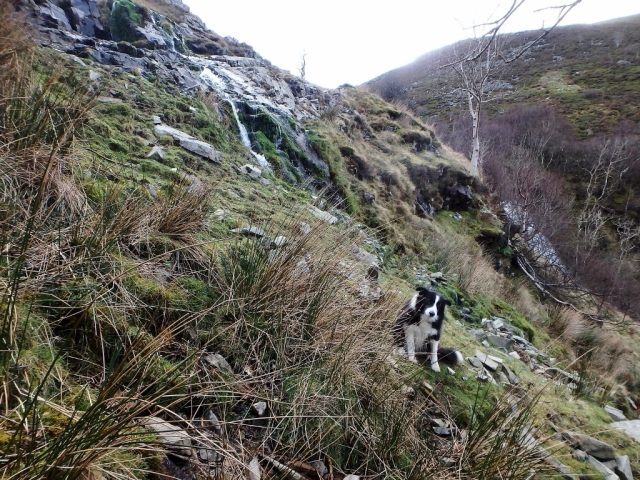 “Woof! What do you think Boss? Not looking good is it? Woof, Woof!”

A slip or a fall would probably not have been terminal, but one thing was certain – it would hurt, probably a lot!    I’ve been doing this ‘mountain thing’ for most of my life without getting injured, and I wasn’t about to break that record.   Equally, I wasn’t ready to head home.   A change of plan was looking likely. 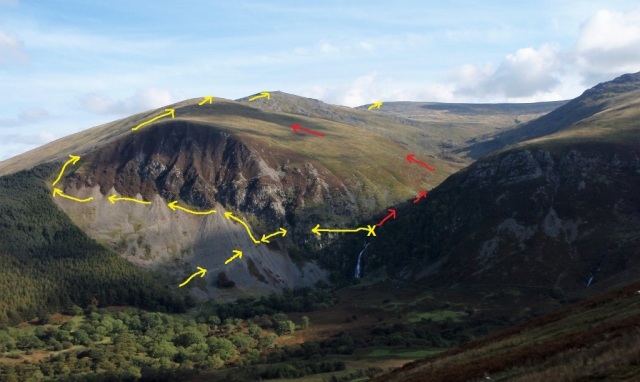 Above the screes I had crossed, there was a line of grotty, greasy crags that looked even less appealing than the three or four metres of soapy slab.   The map showed the crags running out as they reached the Coedydd Aber forest.   I didn’t fancy flogging up or across the loose scree, but quite often it’s possible to find solid ground at the foot of crags, so that became the plan.   Sure enough, it was possible to pick a way below the rocks following sheep paths, and I gradually drew nearer to the forest. 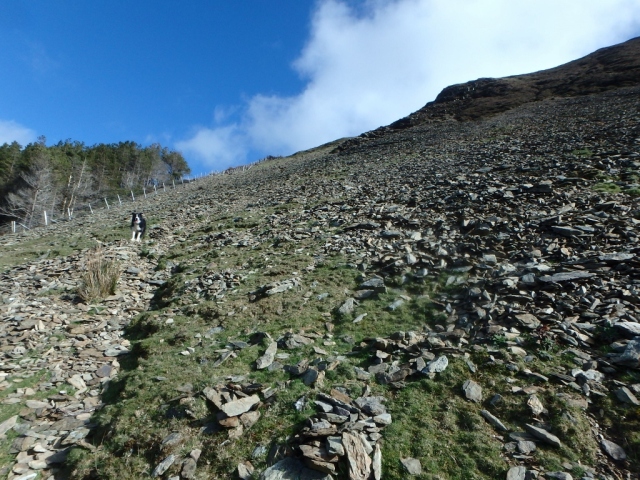 At the end of the screes, time to head upwards 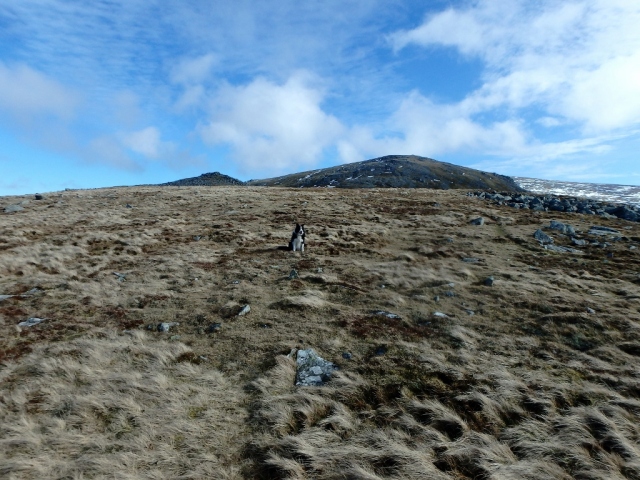 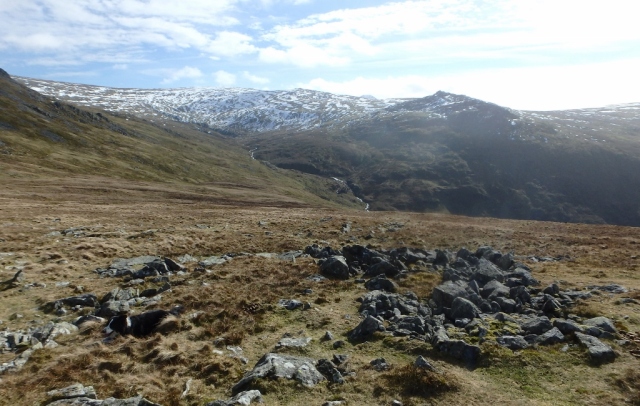 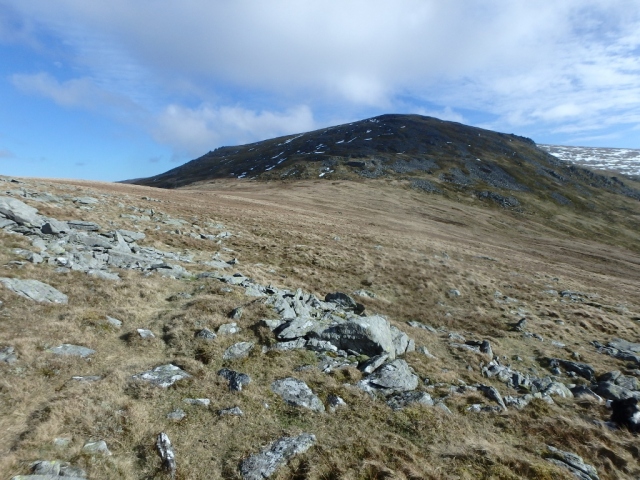 At the end of the screes, a better path headed straight up following the edge of the forest, followed by a slightly less-steep pull up to the summit of Llwytmor Bach.  The faffing about at the slab, plus the detour, had cost me an extra 2 kms and an extra 100 metres of height gain – I had also taken an extra hour, and was about to add more distance and time in visiting one of the many aircraft crash sites found in the Carneddau. 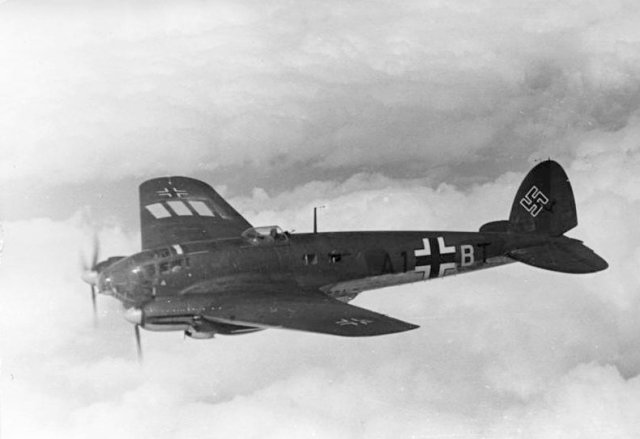 On the night of 12/13 April 1941, the crew of Heinkel He-111 F4801 had spotted the aircraft carrier HMS Victorious at the docks at Barrow-in-Furness while on a reconnaissance flight.   On the following night, the bomber took off again from its base at Nantes, the crew tasked with bombing the ship.   The attack failed when the crew found that the ship had been moved, and under some intense anti-aircraft fire they released their bombs on the dock and made for home.

Looking down towards the crash site

The anti-aircraft fire had damaged the compass, radio and one engine, and the aircraft headed back to Nantes over the Irish Sea, avoiding the defences around Liverpool.   At 0300hrs the aircraft struck the plateau at Llwytmor Bach.  The aircraft appears to have careered over the ground before coming to a halt on the slopes of Llwytmor before catching fire and burning out. 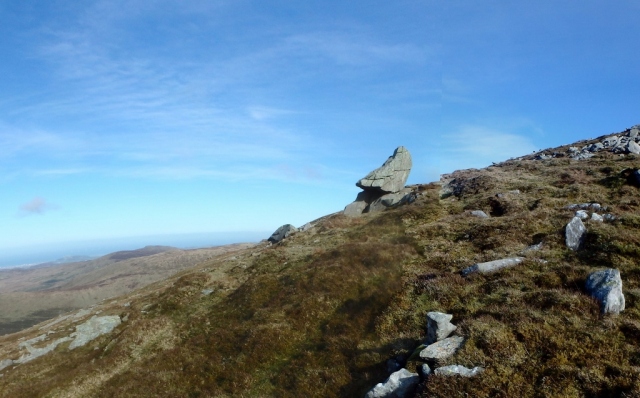 The initial impact killed engineer ‘Gefreiter’ Josef Brüninghausen but the remainder of the crew survived, and the least injured of them, ‘Gefreiter’ Kurt Schlender, made his way across the plateau and down the valley of the Afon Anafon, where he sought help from a farm on the road down to Abergwyngregyn.   The three survivors spent the remainder of the war as prisoners. 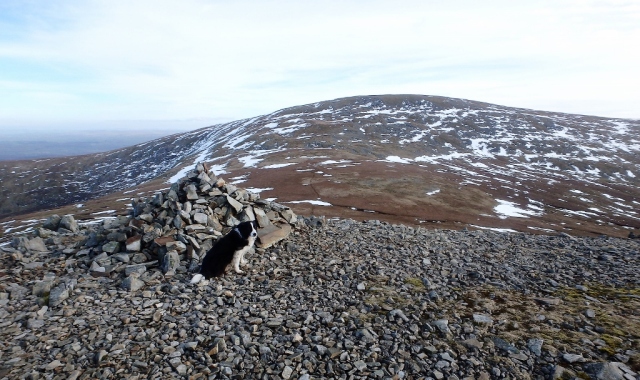 The summit of Llwytmor, looking towards Foel Fras 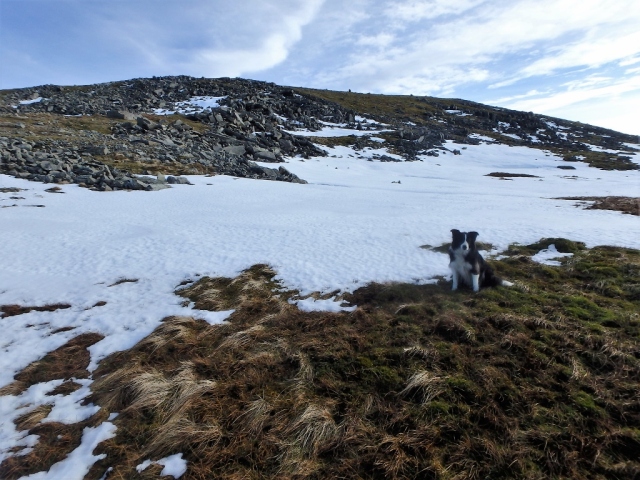 Snow and boulders on the ascent of Foel Fras

Between Llwytmor and Foel Fras, I met a party of two heading the opposite way.   The older of the two men mentioned the nearby Heinkel crash site, and I told him I had just come from there.    He went on to say that his uncle had visited the site some years earlier and had found a signet ring belonging to one of the crew of the aircraft, and had been able to pass it on to relatives in Germany. 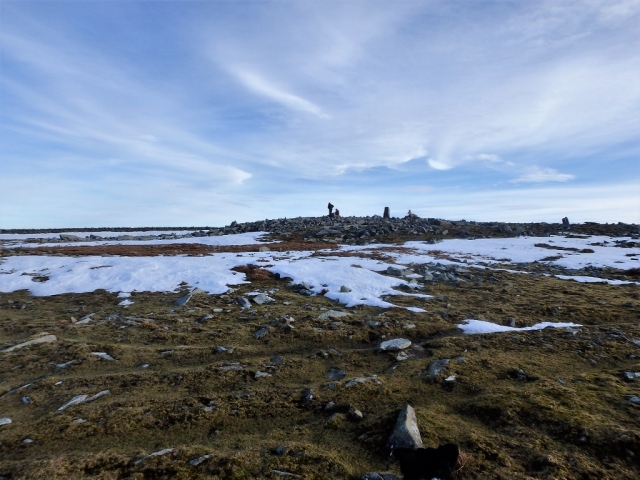 At Foel Fras I had another decision to make.    I still had about 10 kms of my original route (red dashes on the map) back to the car, but it had taken me 5 hours to get to Foel Fras instead of about 3½ hours, due to the delays caused by the diversion, and the state of the snow patches on the route – the snow was extremely soft in places, and each patch resulted in a delay, either through sinking knee-deep or in detouring around it.

The view to Foel Fras (left) and Llwytmor, as seen at Bwlch y Gwryd on Monday 6 March ….

I had no way of knowing how much snow there might be on the planned route via Carnedd Gwenllian, but most of that way back was high level, and more snow patches on the route would cost more time and energy.    However, I could see that the route down to Llyn Anafon had lost much of the snow that had been present three days earlier, and a return that way would also be about 2 kms shorter – it didn’t take long to decide which option . 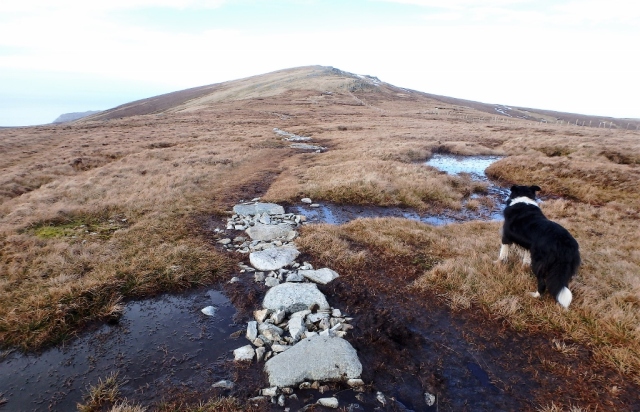 Drum (right) and the start of the descent to Llyn Anafon 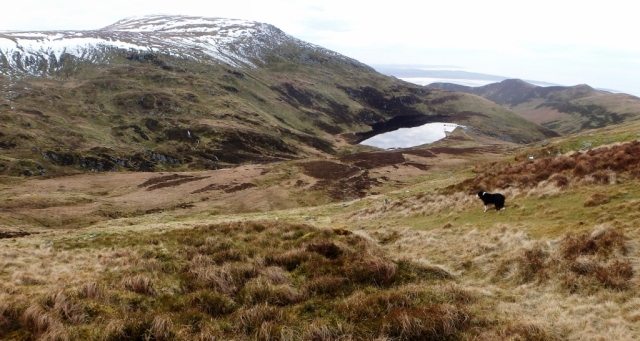 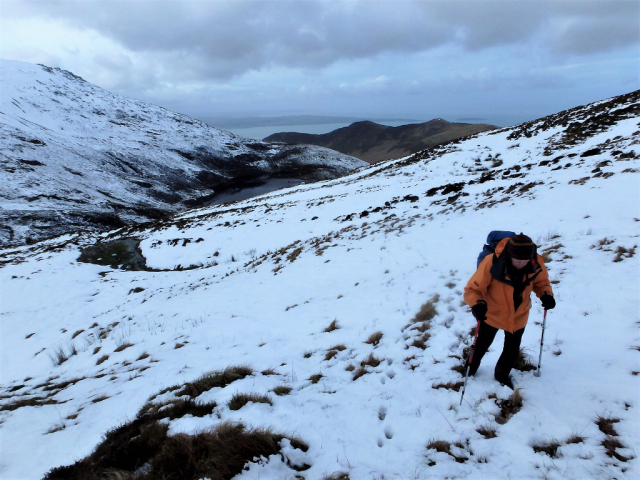 Sure enough, when I reached Bwlch y Gwryd between Foel Fras and Drum, I could see that the rest of the descent was all on grass.   ‘Mist’ and I made short work of that, and the track above the Afon Anafon gave even faster progress.    Two hours after leaving the summit of Foel Fras I was back at the car, having to explain to the dog that her overdue dinner time would have to wait another hour until we arrived home. 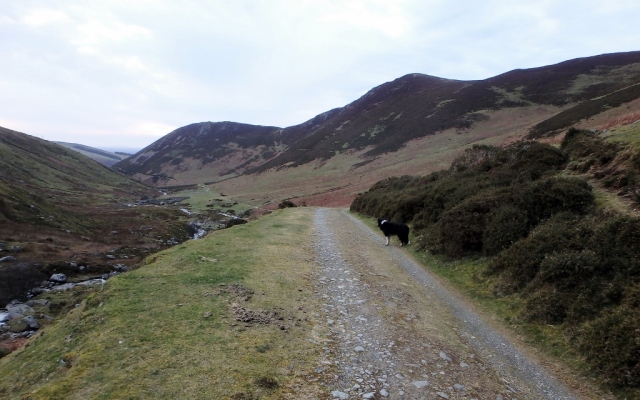 I've been mucking about in the mountains for longer than I care to mention. I started out by walking my local hills, then went on to rock climbing, mountaineering and skiing. Still doing it, and still getting a buzz. I'm now sharing the fun, through my guided walking business (Hillcraft Guided Walking) and by writing routes for other publishers, mainly Walking World and Discovery Walking Guides. Just to make sure I keep really busy, I am also currently a member of my local mountain rescue team.
View all posts by Paul Shorrock →
This entry was posted in 5. North Wales, Aircrash Sites and tagged Border Collie, Carneddau, hiking, hillwalking, mountains, photography, Snowdonia, waterfall, winter. Bookmark the permalink.