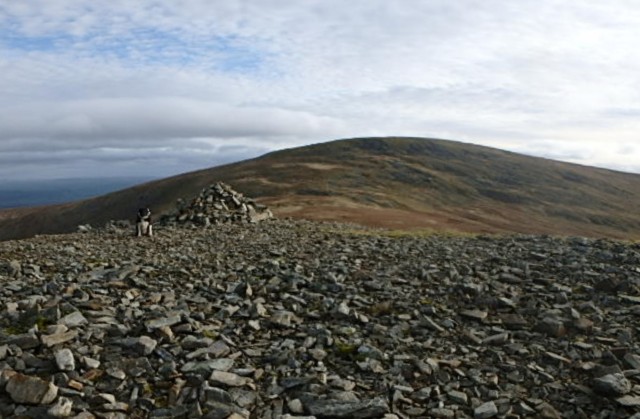 There have been many distractions in 2017 keeping me from the hills and mountains of North Wales, the main ones being the hills and mountains of the Scotland and the Lake District.    When the opportunity for a Welsh mountain day came along, I already had a suitable candidate – a return to the Northern Carneddau to finish off the route I had started (and abandoned) in March (see post #220) 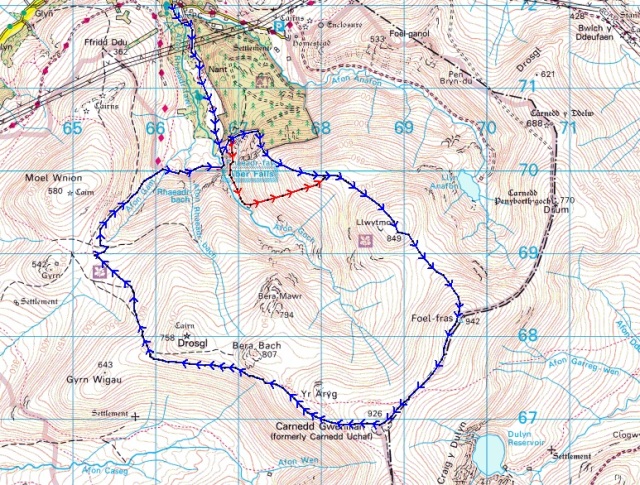 The route, shown in blue (the red route is the abandoned section of March 2017) 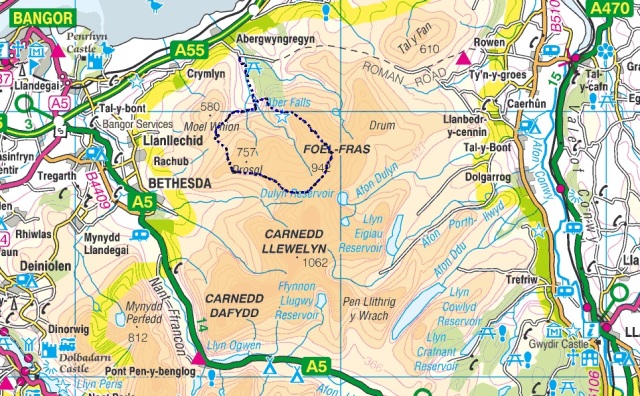 The mountains of the Carneddau

Border Collie ‘Mist’ with Aber Falls in the distance

The original plan in March was to approach Foel Fras from Aber Falls, then to swing southwest to Carnedd Gwenllian.    Instead I had run out of time after a minor epic on the ‘greasy slab’ above Aber and snowdrifts on Foel Fras, and at Foel Fras summit I had gone northeast to Drum to shorten the day.   This time I was going to take the Gwenllian option and what’s more, I had a plan!

Aber Falls, seen from the walk in

Zoomed view of the falls 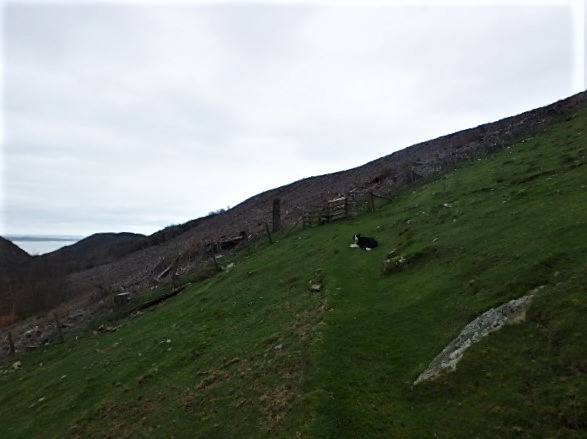 ‘Mist’ next to the remains of the woods at Meuryn Isaf ….

…. showing the woods after harvesting

The plan was simple enough – the ‘greasy slab’ was almost certainly going to be in the same state as last time following a long, wet spell, so I would head straight for the diversion by the woods of Meuryn Isaf and Meuryn Uchaf.    Arriving at the woods, I was greeted by a scene of devastation – the forest had been harvested, leaving a wasteland behind.    Commercial forestry isn’t always very pretty, with its straight, regimented lines, but a felled forest is worse.

Llwytmor on the left skyline

The tiny shelter at Llwytmor Bach

I pressed on up the slopes of Llwytmor Bach, leaving the wasteland behind me.    Looking northeast I had great views across to the ‘Orsedd’ hills on the route from Drum down to Aber, but soon my view was restricted to the grassy mound of Llwytmor Bach.    There is a tiny stone shelter at the summit, which seemed as good a place for a lunch break – Border Collie ‘Mist’ was in full agreement, and did a good job of mugging me for my sandwiches.

Looking ahead to Llwytmor from the summit of Llwytmor Bach

Starting the descent to the col between Llwytmor and Foel Fras 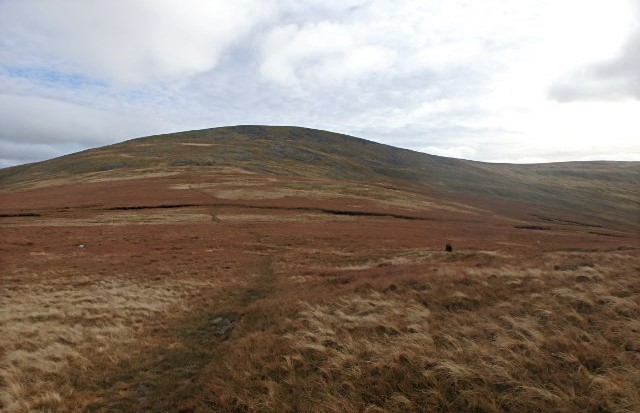 From Llwytmor Bach (690 metres) I started on a long slog up Llwytmor (849 metres) and Foel Fras (942 metres) with a loss of height of seventy metres between them.    Last March the walking had been made more arduous by snowdrifts.   This time the ground was waterlogged, on top of which I was recovering from a heavy cold, and the summit of Foel Fras was a very welcome sight when I finally arrived at the trig point.

The path towards Carnedd Gwenllian

From Foel Fras the route was effectively downhill, apart from the occasional cheeky bit of ascent.   First on the list was a descent to Carnedd Gwenllian, previously known as Carnedd Uchaf (High Cairn) but now renamed after Gwenllian of Wales, the daughter of Llywelyn ap Gruffudd, the last native Welsh ‘Prince of Wales’.   Rising in the distance was Carnedd Llewelyn, the highest peak of the Carneddau, with its satellite peak of Yr Elen, but for me it was time to head west.

On the return leg with Bera Bach on the centre skyline

…. with wild ponies below the summit

The path below Bera Bach and Drosgl was a good navigational handrail, allowing good progress.    Not that I was in any rush – I had started late in the morning to tackle an 18-km route, so it wasn’t a question of would it get dark before I finished the route, but when would it get dark.    Fortunately, this was also part of the plan – my missus hates walking in the dark (I think she likes to be able to see what she is about to fall off!) but I love it.

The sun setting over the mountains of the Glyderau 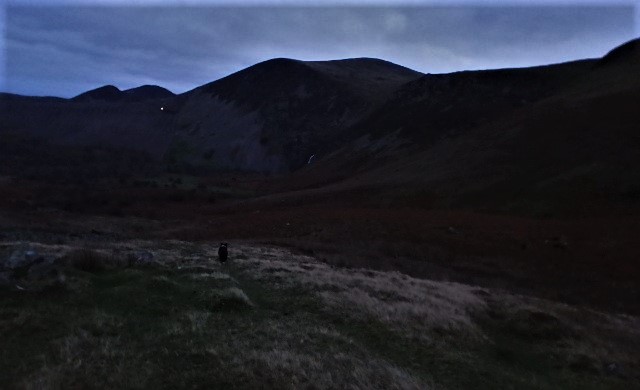 Sure enough, after passing Drosgl the sun dipped down behind the mountains of the Glyderau, and as I turned the corner to head back to Aber Falls, the darkness took over.  For me, walking in the dark is a real pleasure, giving a different dimension on being out in the mountains – the only dimension that ‘Mist’ was interested in by now was a round dish containing her dinner!

Time to head for home.

p.s. At the start of the walk I had a fumbly moment trying to turn off the automatic flash on my camera – in doing so I also managed to turn down the resolution of the images to a measly 640 x 480, which is why the pics are not particularly sharp.   It was a pity I only realised this when I got home!

I've been mucking about in the mountains for longer than I care to mention. I started out by walking my local hills, then went on to rock climbing, mountaineering and skiing. Still doing it, and still getting a buzz. I'm now sharing the fun, through my guided walking business (Hillcraft Guided Walking) and by writing routes for other publishers, mainly Walking World and Discovery Walking Guides. Just to make sure I keep really busy, I am also currently a member of my local mountain rescue team.
View all posts by Paul Shorrock →
This entry was posted in 5. North Wales and tagged Border Collie, Carneddau, hiking, hillwalking, mountains, photography, Snowdonia. Bookmark the permalink.