The route – clockwise from the red flag 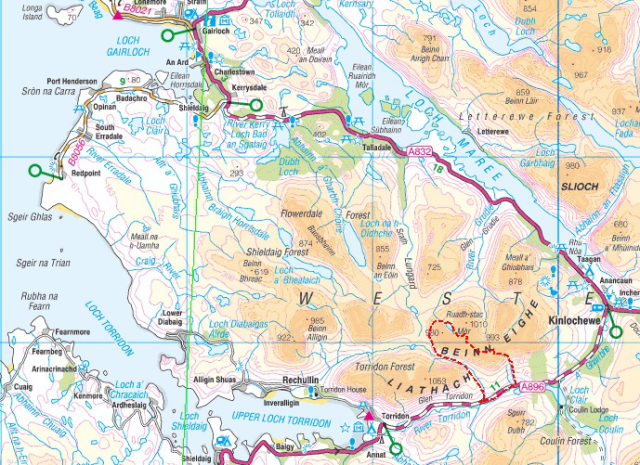 Our trip to Scotland in 2017 had been blessed (mostly) with good weather, but my day on Beinn Eighe (see post #230) had included a bitterly cold wind that didn’t encourage hanging about, and I wanted to see a bit more of the mountain and to enjoy it at a more leisurely pace.    Almost a year to the day I was back again, with plans to spend a bit longer visiting the site of the 1951 aircrash (see post #227).

Heading for the gap of Coire Dubh Mor

Liathach (left) with the route to Coire Mhic Nobaill on the right ….

…. and Beinn a Chearcaill to the north after turning the corner round Sail Mhor

The final climb up into Coire Mhic Fhearchair

The walk out to Coire Mhic Fhearchair is worth doing for its own sake, passing as it does through magnificent mountain scenery and ending up in one of the most dramatic corries in Scotland.   The route passes through Coire Dubh Mhor, a pass between the mighty Liathach and Sail Mhor on the Beinn Eighe Ridge, before turning the corner to go round Sail Mhor for the ascent up to Coire Mhic Fhearchair.

Coire Mhic Fhearchair with Triple Buttress at the far end 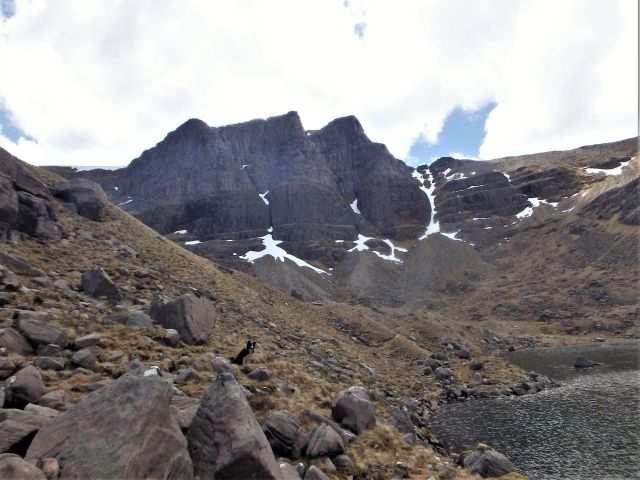 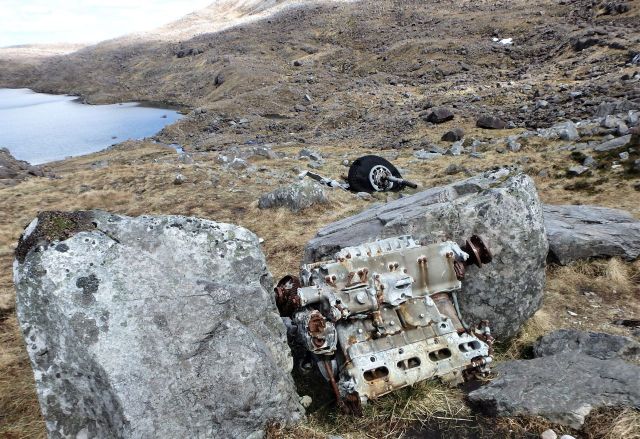 One of the four Rolls Royce Merlin engines …. 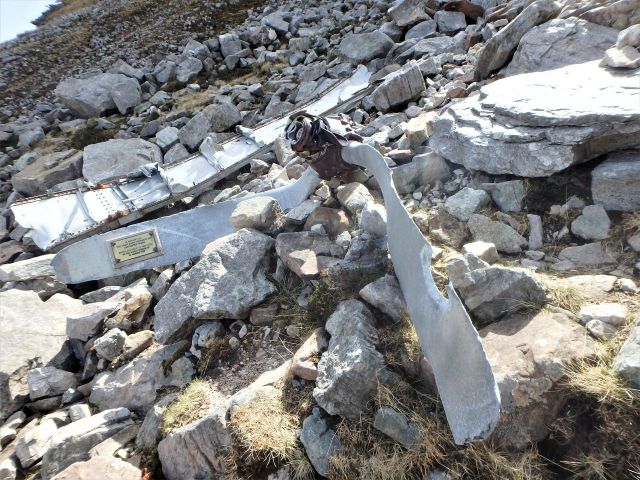 …. and one of the four propellers (Note the plaque attached) 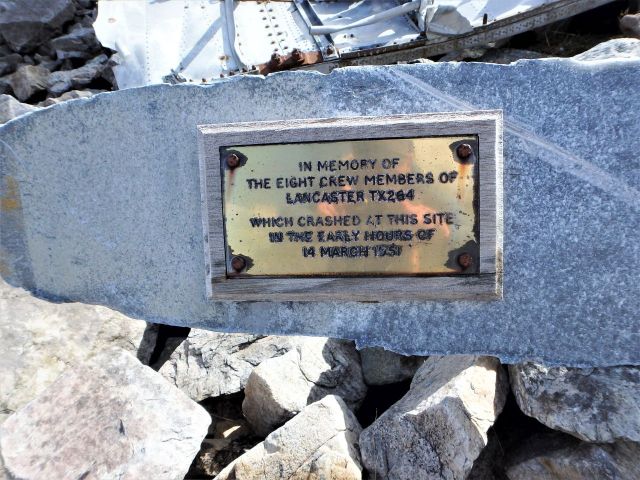 Memorial plaque attached to the propeller

The most striking feature of the corrie is the cathedral-like Triple Buttress.   In March 1951, an Avro Lancaster maritime reconnaissance aircraft struck the right-hand side of the buttress just below the summit of Coinneach Mhor.   All eight crew members were killed, and it took five months of working in sometimes appalling weather conditions for the rescue team to recover all the bodies – the wreckage is a poignant memorial to those who died. 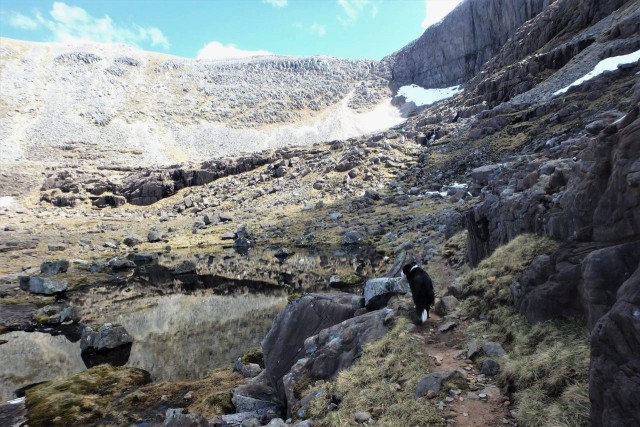 On the high traverse path ….

…. with the view back down to the loch 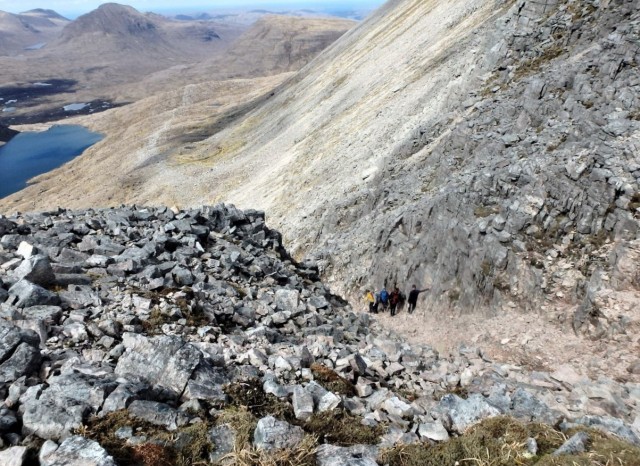 The next task was to regain the path from the loch which heads up towards a steep scree gully.    The way across was straighforward, though ‘Mist’ did need a bit of a shove up a big rock step – the rest of the time I was trying to keep up with the collie!    I stopped for a quick bite before taking on the top of the gully, which gave the dog a great opportunity to mug me for a sandwich.    The final section was short, and a descending party was considerate in waiting for me and ‘Mist’ to get out of the target area before they moved. 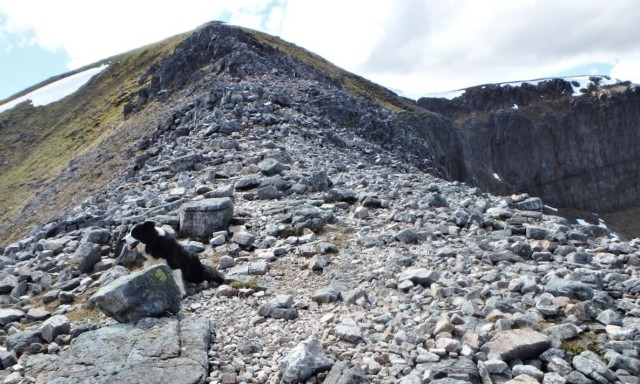 The col at the top of the scree gully, with the ridge up to Coinneach Mhor

‘Mist’ at the plateau of Coinneach Mhor, with the summit behind 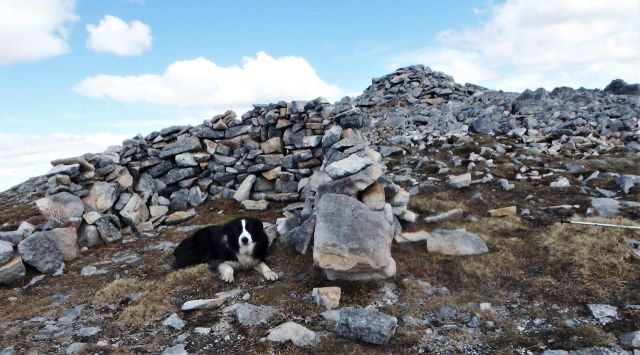 The summit of Coinneach Mhor

Looking towards the top of Fuselage Gully from the summit …. 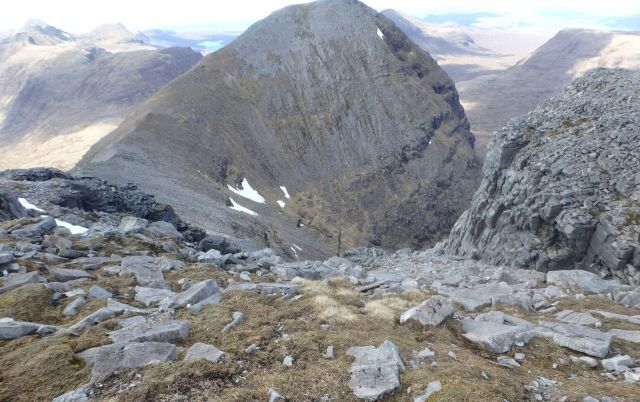 …. and a view down into the gully towards the impact point

I had given the summit of Coinneach Mhor a miss on the previous visit, as the sharp, cold wind had made hanging about unpleasant.    This time I had a wander over to the summit and peered over the edge down towards the crash-site – if the aircraft had been just 10 metres higher it would have missed the mountain.

Back on the plateau, heading towards Spidean Coire nan Clach in the centre distance

On the Beinn Eighe Ridge 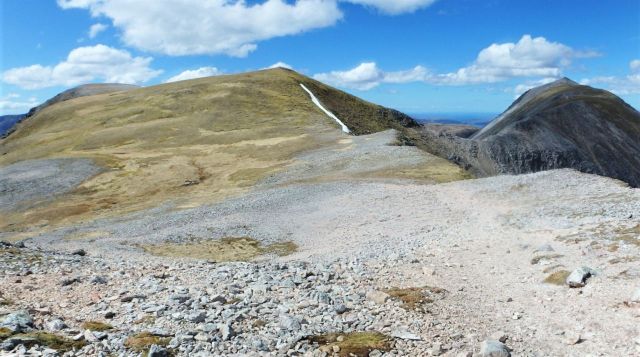 Looking back to Coinneach Mhor (left) and Ruadh Stac Mor

Further along the Beinn Eighe Ridge with Spidean Coire nan Clach getting nearer ….

…. with a view back along the ridge

The rest of the trip along the Beinn Eighe Ridge was pleasant in the warm weather.    I had thought about a different descent route from Spidean Coire nan Clach, following a comment on the earlier post by fellow blogger Mountain Coward – her walking companion had taken a nasty tumble on the steep section of the usual descent.    In the end I decided on the route I had done before as I already knew the ground. 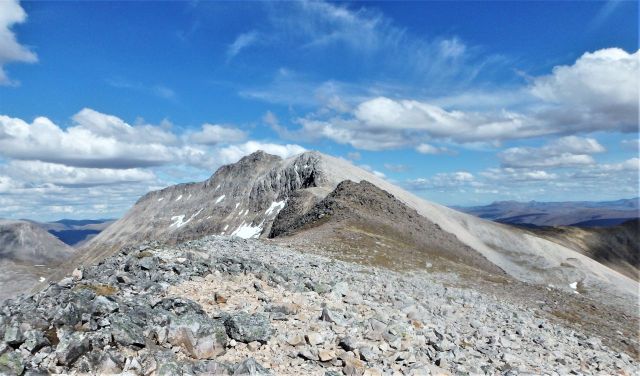 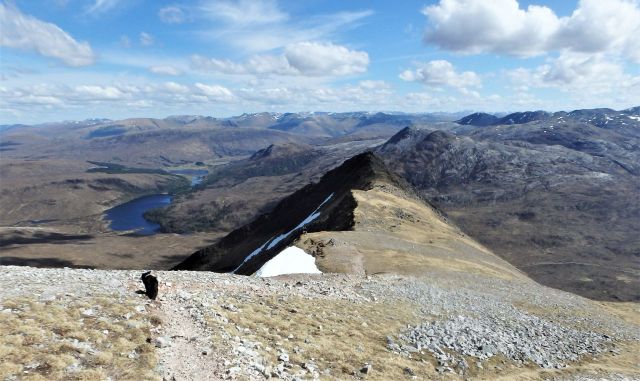 …. with a cheeky little snow wall obscuring the path down

It wasn’t quite as I found it previously though – a cheeky little snow wall obscured the start of the path, though this was easily by-passed.    From there it was downhill all the way before a 2km road walk – ‘Mist’ would have to hang on for dinner time!

Further down the path, heading for home

p.s. – I’m probably not finished with Beinn Eighe – there’s much of the mountain I haven’t seen yet.

I've been mucking about in the mountains for longer than I care to mention. I started out by walking my local hills, then went on to rock climbing, mountaineering and skiing. Still doing it, and still getting a buzz. I'm now sharing the fun, through my guided walking business (Hillcraft Guided Walking) and by writing routes for other publishers, mainly Walking World and Discovery Walking Guides. Just to make sure I keep really busy, I am also currently a member of my local mountain rescue team.
View all posts by Paul Shorrock →
This entry was posted in 1. Scotland, Aircrash Sites and tagged Border Collie, hiking, hillwalking, mountaineering, mountains, photography, Scottish Highlands. Bookmark the permalink.